Gastric bypass surgery is an operation that makes your stomach smaller and bypasses a segment of your small intestine.

Usually carried out laparoscopically, gastric bypass involves reducing the stomach size and bypassing your lower stomach and part of your intestine.

A one-night stay in hospital, with one week of recovery time.

What is gastric bypass surgery?

Gastric bypass surgery involves reducing the size of your stomach and bypassing your lower stomach and part of your intestine. This makes you feel fuller and suppresses your appetite, reducing the amount of calories and nutrients that are absorbed.

Previous Next
Who can have gastric bypass surgery?

You are likely to be recommended gastric bypass surgery if you have tried and failed to lose weight and meet the following requirements:

You must also be willing to commit to long-term dietary and lifestyle changes, which will be monitored at follow-up appointments.

Gastric bypass surgery is not recommended for women who are planning to become pregnant within 12 months of the procedure.

How is gastric bypass surgery carried out?

Gastric bypass surgery is done under general anaesthetic so you’ll be asleep. It usually takes around one hour.

Gastric bypasses are usually carried out laparoscopically, using small surgical instruments, guided by a telescope with a video camera – all inserted through a series of small cuts in your abdomen.

Your surgeon will use surgical staples to separate the top section of your stomach from the lower part, creating a ‘gastric pouch’. They will then cut an opening in the pouch and connect it to a section of the small intestine.

Your surgeon will close the cuts in your abdomen using dissolvable stitches or small metal clips and place a dressing over the area.

You’ll normally be able to go home one to two days after the operation. You can resume walking as soon as possible and return to work and normal activities within a week of surgery.  You can travel a week after surgery.

Long term – along with adopting a healthier lifestyle – you will need regular blood tests once a year to ensure you are getting enough nutrients. You may also need to take some nutritional supplements such as a generic multivitamin and mineral preparation.

What are the side effects of gastric bypass surgery?

Following a gastric bypass, you may experience some bruising, swelling and tenderness around the operation site.

When you begin eating again following surgery, you may feel sick or even vomit. This is because your stomach needs to adjust to consuming smaller amounts of food.

What should I consider before having gastric bypass surgery?

Gastric bypass surgery is an operation that comes with lifelong commitments – it isn’t an easy route to weight loss.

Before deciding whether to have surgery, patients should consider the following:

What are the alternatives to gastric bypass surgery?

There are several different types of bariatric treatment, both surgical and non-surgical. If you would prefer a non-surgical approach, we offer treatments including weight loss injections, gastric balloons and endoscopic sleeve gastroplasty (ESG).

Find out more about our bariatric treatments >

For gastric bypass surgery to be successful, patients must be able to commit to the necessary dietary and lifestyle changes. In the days and weeks following your surgery, you will have to adjust your eating habits as your stomach readjusts to its new, smaller size.

You won’t be able to return to regular, solid foods immediately after surgery – this is because your stomach needs time to adjust. Instead, you’ll asked to follow a schedule roughly similar to the below.

You will also be advised to eat slowly and avoid heavier foods, such as white bread or red meat. You will also need to take nutritional supplements, such as a good multivitamin, daily.

Your consultant will advise you on exercise following gastric bypass surgery. Generally, you will be asked to do low-impact exercises for a short amount of time, like walking or swimming.

Eventually, you will have a phased return to more high-impact exercises, like aerobic exercises, running and weight training. As well as helping you to lose weight, regular exercise also helps improve your overall health and wellbeing.

You will require regular follow-up appointments after surgery. This is to ensure that you are losing weight and maintaining good health.

You will also need to have yearly blood tests to ensure your body is getting enough nutrients.

Why choose us for gastric bypass surgery?

Our consultant bariatric surgeons are experts in their field, having trained at top UK teaching hospitals.

Our dietitians work with patients to create tailored meal plans that support their health and weight loss goals.

Weight loss programmes are delivered with the support of specialist psychiatrists and psychologists.

Led by Mr Ahmed Ahmed, our bariatric consultants are experts in their field and have a wealth of surgical experience.

Paying for your treatment

We welcome both self-paying and insured patients.

We offer several ways for patients to self-pay, including pay-as-you-go and self-pay packages.

Find out more about self-pay >

At Cromwell Hospital, we accept private health insurance from most major providers, including AXA, Aviva, Bupa and Vitality.
Find out more about paying with insurance >
Previous Next 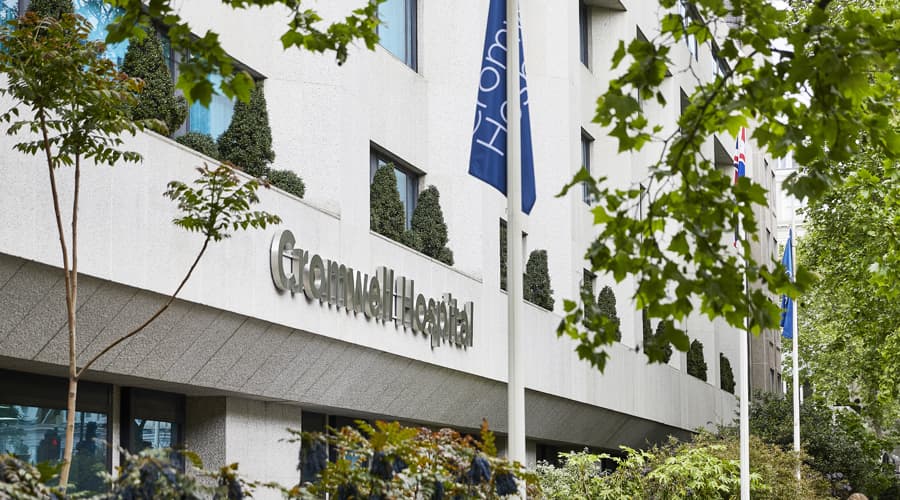 More about Cromwell Hospital >
Previous Next

Our telephone lines are open 8am to 8pm Monday to Friday and 8am to 2pm Saturdays.

Please note - regrettably we are unable to answer specific medical questions or offer medical advice via email or telephone.